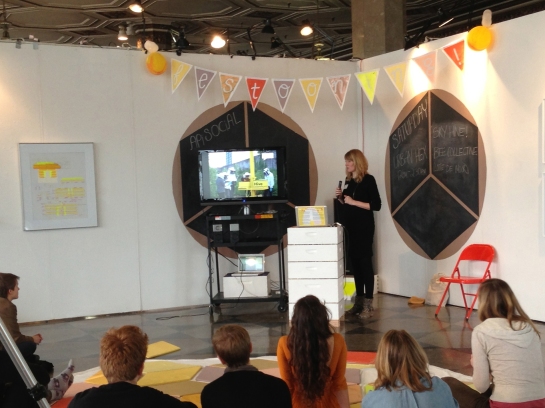 Last Saturday in behave of the bee collective, I presented at the festooning event at the 808 gallery of Boston University.
Festooning is a lacework of bees hanging together, leg-to-leg, between the frames of comb. The structure symbolizes how bees are part of a collective in which every individual takes part in the greater good. I good title for the event, because from the moment I entered, I felt a strong sense of solidarity between people with the same goal: helping bees by keeping them.
Besides my lecture about the projects of the bee collective, especially the sky-hive, 5 others presented their way of urban beekeeping. 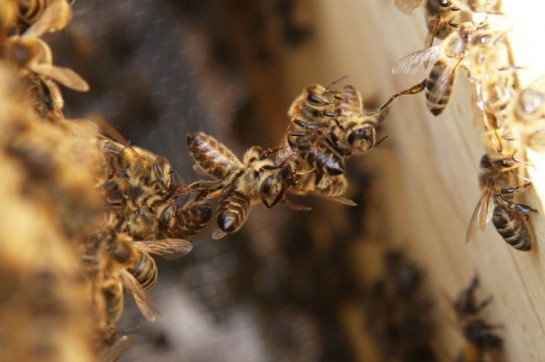 In case of the honeybee, America deals with problems in a different scale. Where in the Netherlands just a small portion of the colonies is used in commercial horticulture, in the USA less then 10% of the colonies are held by amateurs or small farmers. The majority of the colonies are used in the almond industry and moved on large trucks cross the states. They expect that 75 % of them won’t survive this winter.

Luckily the atmosphere of the event was positive. A various group of people around Boston are involved in beekeeping. Collective beekeeping is increasing in popularity there as well. Ten students of Boston University are keeping two colonies at the campus. A community garden organizes a honey day for the neighborhood and on several rooftops bees are kept in corroboration with the chefs of the buildings restaurants.

The participants of the Festooning event were therefor above all interested in the possibilities of the Sky-hive to keep bees in a save, within the regulations in a social way.
Hopefully I inspired the local government of Boston as well; that it is possible to see bees as a contribution in the community, instead of a hassle!

Pictures and movies of the lectures will soon be posted on: http://festooning.wordpress.com/